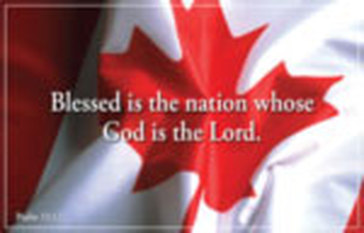 Psalm 33:12
A Mari Usque Ad Mare:  A Mari usque ad Mare, “From Sea to Sea”, is Canada’s motto which was derived from Psalm 72:8, and translated in latin “Et dominabitur a mari usque ad mare, et a flumine usque ad terminos terrae.”  “He (JESUS) shall have dominion also from sea to sea, and from the river unto the ends of the earth” is the proper translation in King James version of the Bible.

When the British North America Act was first drafted, Sir Samuel Leonard Tilley (a founder of Canada) brought attention to this verse of Scripture and suggested the term “Dominion” be chosen to represent Canada as a whole (Christian Heritage excerpt from ... The Canadian Encyclopedia Plus © 1996 by McClelland & Stewart Inc). Will you serve GOD or another "god" in the Dominion of Canada?

Dominion of Canada:  The Fathers of Confederation wanted the title of the new nation to be “the Kingdom of Canada.” Sir Leonard Tilley suggested “dominion.”  “He shall have dominion also from sea to sea, and from the river unto the ends of the earth” (Psalm 72:8).  The fathers of confederation said it was intended to bring dignity to the federation, and bring tribute to the monarchical principle.

“Dominion”remains Canada’s official title under the Constitution Act, in 1982 which applied to the federal government and Parliament.  Dominion refers primarily to the Dominion of Canada and Psalm 72:8 (Constitution Act, 1867, preamble and s3); Psalm 72:8; excerpt adapted from The Canadian Encyclopedia Plus © 1996 by McClelland & Stewart Inc., author, Eugene A. Forsey (Canadian senator).

Church and State Video:  Brian Lilley and John Robson looks at why the state needs religion for guidance.
http://www.sunnewsnetwork.ca/video/church-and-state/1344617367001